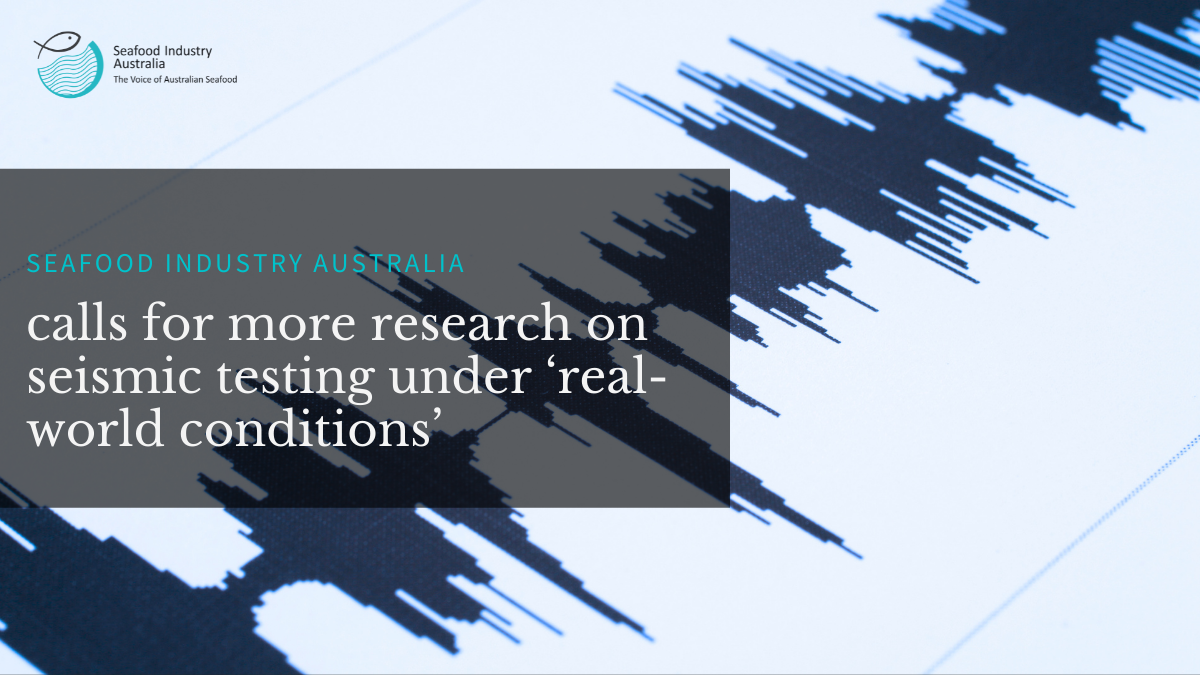 Seafood Industry Australia (SIA), the national peak-body representing the Australian seafood industry, has called for more research into the impacts of seismic testing on fish stocks following the release of an Australian Institute of Marine Science (AIMS) report which focuses on a singular ground-dwelling fish species.

“We welcome research on the topic of seismic testing, and this study presents an interesting case, but ultimately it highlights there are significant knowledge gaps and more research under real-word conditions is needed,” SIA CEO Veronica Papacosta said.

“Studies conducted to date generally report fish and marine species are impacted by seismic activities. These impacts have been shown to not only affect commercial catches, but stock sustainability, breeding activity, growth rates, increased mortality, feeding activity, animal health, displacement, and the biodiversity of these important ecological habitats.

“What we have seen in this AIMS study is that the demersal Red Emperor fish located in a small pocket of the tropical shelf in north-western Australia did not appear to immediately respond to mock seismic surveys. However, the cumulative and long-term impacts were not studied. It is these unseen and mostly unknown impacts which are of key concern, and will have lasting impacts to the productivity of our fisheries.

“Importantly, the surveys in the AIMS study were performed at a lower volume than in real-world seismic activities. They were also run for a shorter duration than in the real-world, and conducted in an area that has been subject to multiple seismic surveys over a number of decades. It remains unclear if the fish in this area have become conditioned to these tests, or suffer from long-term impacts due to previous surveys.

“We appreciate there are conflicting views on the impacts of these surveys on fish fauna and whether they harm a fishery’s commercial viability. Ultimately, it must be understood that irrespective of opinion, the results of a survey conducted under non real-world conditions cannot be extrapolated to the remainder of Australia’s marine environments. Or even the other fish species in the same area.

“While we welcome the report, it is important to note the study is confined to one particular demersal fish species. It does not take into consideration other tropical demersal fish species in the area like Goldband Snapper or Pink Snapper which similar studies have shown to have considerable impacts from seismic testing. One key difference between these species is they will come up to the surface to feed, rather than the Red Emperor which feeds on the bottom. Among other concerns, this survey does not look at pelagic fish in the area, being the fish which live in the mid-section between the bottom and the top of the water, crustaceans, zooplankton or any other marine animals.

“We are cognisant of other peer-reviewed research into seismic impacts on demersal fish species which have shown profound negative impacts to the fish stocks. Including a Fisheries Research and Development Corporation report from last year which showed a 80-99 per cent decline in the catch rates of flathead and school whiting following seismic testing in the Danish seine commercial fishery off Lakes Entrance. This study was conducted under real-world conditions, and coupled with multiple control sites.

“A joint study by The University of Tasmania’s Institute for Marine and Antarctic Studies and Curtin University’s Centre for Marine Science and Technology found juvenile crayfish and puerulus (post larval stage lobsters) could not right themselves after seismic testing, and had slower growth compared to those not exposed to the blast. While adult crayfish were unable to extend their tails which they use to swim. The study also showed an increase in scallop mortality following controlled blasts.

“Importantly, a 2017 study on Zooplankton, which underpin the health and productivity of marine ecosystems globally, found seismic surveys cause significant mortality. This is of great concern as a significant component of zooplankton communities comprises the larval stages of many commercial fisheries species. While other zooplankton support healthy ocean ecosystems.

“As an industry, we appreciate any study that adds to the growing knowledge base and localised data on seismic surveys. However, we remain concerned about the potential of the intense low frequency acoustic signals produced during these surveys to disturb, harm and even kill marine species.

“We advocate for more research, facilitated by oil and gas companies, that looks at different fish stocks, targets different locations and habitats, and explores the use of alternative, less damaging technologies for future surveys.”