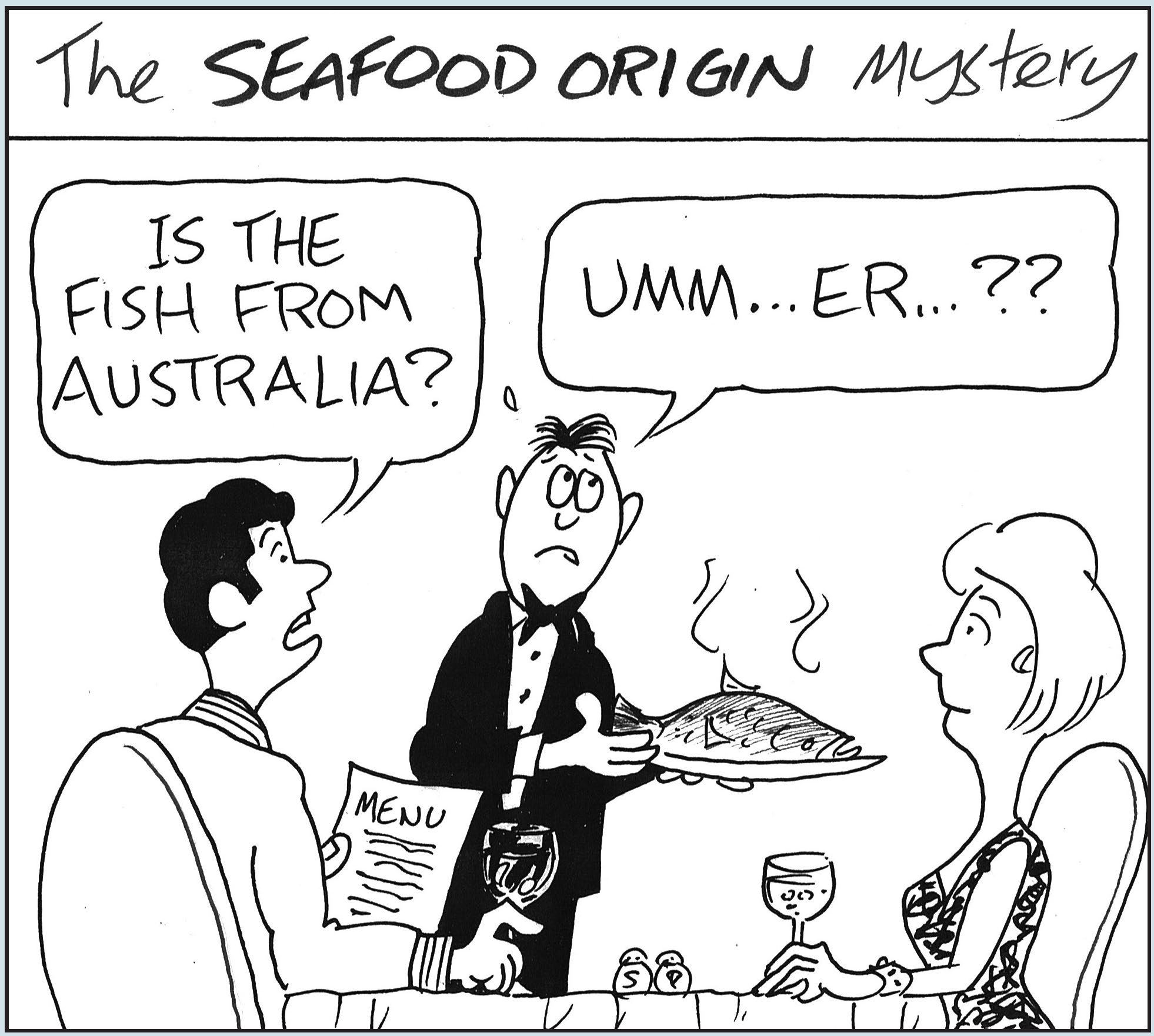 From this Sunday (July 1, 2018) all food sold in retail stores across Australia will have to be marked with the product’s country of origin. Today, the national peak body for seafood, Seafood Industry Australia (SIA), has urged consumers to demand the same for foodservice sales.

“The changes to Country of Origin Labelling in retail are excellent as they provide consumers with clear information on where their food comes from, which will allow them to make informed purchasing decisions; but retail is only half of the story,” Seafood Industry Australia CEO Jane Lovell said.

“The new laws don’t apply food sold in places like restaurants, cafes, pubs, clubs and fish and chip shops. We want to see these labelling laws extended to foodservice.”

At the supermarket and when you buy fresh fish, by law, all seafood has to be labelled with its country of origin. But, when you go out to dine, there is no obligation to label where the seafood you are about to order and eat comes from.

“What SIA can’t understand what the difference is – the government believes consumers have a right to know where their seafood comes in retail – why not when they are eating out?” Ms Lovell said.

“Australians love their seafood and next to freshness, the country of origin is the second most influential factor for consumer choosing which seafood they buy.

“Twenty years ago almost all the seafood Australians ate was Australian seafood.  Most assume it still is. But, people are flabbergasted when they find out 70 per cent of seafood eaten in Australia is imported.”

Ms Lovell said they aren’t vilifying imported seafood, but believe consumers should be provided with the same information in foodservice that they have in retail.

“Two Senate inquiries have called for this loophole to be closed and more than 86,000 consumers signed petitions asking for Country of Origin Labelling to become compulsory for seafood sold in the foodservice industry. Yet nothing has changed,” Ms Lovell said.

“The Northern Territory successfully introduced Country of Origin Labelling for cooked and pre-prepared seafood in the foodservice industry in 2008. We want the rest of the country to follow suit.

“What we’d like to see is Australian seafood identified on menus, simple as that. At a minimum we’d like to see something like Australian Barramundi, but businesses can be as specific as they want. For imported seafood a simple ‘i’ to denote it’s imported with a clear explanation of what it means printed somewhere on the menu.”

Other “hero protein” sources like beef and lamb aren’t subject to the same import battle as seafood. Ms Lovell said this is why the origin of seafood needs to be listed.

“Australians want to buy Australian products and many are prepared to pay more for Australian seafood,” she said.

“Buying Australian seafood supports our Aussie fishers and supports our world-class fisheries, which provide some of the most sustainable seafood in the world.

Ms Lovell acknowledged there is nothing wrong with ordering and eating imported seafood, however she believes consumers have the right to know where their food comes from.

“We’ve argued for this change at a political level, however we were told consumers should ask foodservice staff where their seafood is from, this doesn’t work,” she said.

“Research conducted for SIA found 66 per cent of foodservice staff couldn’t tell customers where the seafood they were serving was from.

“Everytime Australians go out to dine they should be asking, ‘Where is my seafood from?’.”

Ms Lovell said Australians want to know whether their seafood is Australian or not and called on the government to “give them what they want.”

“The Australian seafood industry has invested millions so the quality seafood it delivers can be traced from the boat to the back door of every restaurant,” she said.

“To give consumers the right of choice and seafood producers a fair go, the Australian Government needs to introduce legislation so the foodservice sector has to label seafood with the country of origin, just like the fish retailers have done since 2006.

“The debate has run long enough – consumers deserve to know where the seafood they eat is from, no matter where they buy it.”

Seafood Industry Australia CEO Jane Lovell is based in Melbourne and is available for television, radio, telephone and print interviews regarding Country of Origin Labelling in foodservice.

For more information or to organise an interview please contact